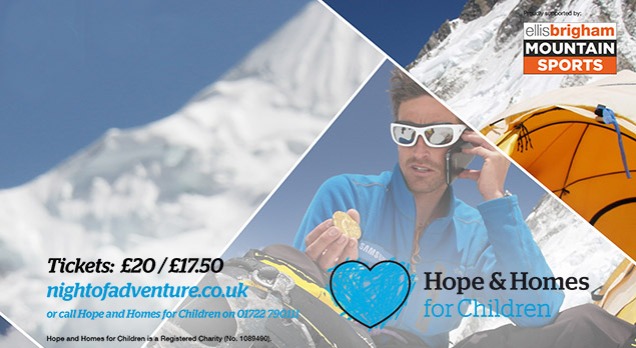 “You can’t wait for inspiration. You have to go after it with a club.”

Last Tuesday night I went to a series of lectures organised by adventurer and inspirationalist extraodinaire Alastair Humphries called the Night of Adventure. The evening was in aid of the charity Hope and Homes for Children, of which Alastair is a Patron. He had lined up a number of adventurers to come along to the evening and gave them the task of speaking about their adventures in 6 minutes ( or 400 seconds) whilst their 20 slides rolled along behind them. the speakers included Arctic Explorer Rosie Stancer, round the world solo rowing, cycle and kayak sensation Sarah Outen MBE, The Turner Twins, the sparkling Anna McNuff and the extraordinary Kenton Cool.

Each speaker rose to the challenge, captivating the audience in their own style, recounting the ups and downs of their journeys or adventures, and in the case of Kenton Cool we also heard a poo related story. These extraordinary people claim they are ordinary – or at least – human after all, subject to the same kind of issues, doubts  and voices in our heads that we all have. For example, Sarah Outen who has rowed across the Pacific and the Atlantic solo is frightened of deep water!! but despite their ‘ordinariness’ they just got on and did it anyway.

Here’s what I learned:

As part of sharing my journey, I want to share some books with you. I love reading and I’ve read some incredible books about the human body and human exploits that have informed me and more importantly have  inspired and moved me and have made me wish that my daily commute was two hours long. I have to read a lot for my work, so when I read for myself, I read to escape from the day. I read to escape to the places I want to be.  For those days when I can’t get out and do, I can read about it instead. I hope I can encourage you to dip into some of these amazing books too…

This is my first book review and its the book that, without a doubt, would come to a desert island with me. I bought it in 2011 and I’ve read it so many times the glue has broken on the spine and pages have come loose. The first time I read it I didn’t eat butter for a month after!

This book is a real treasure. Dr Mike Stroud is the Polar explorer who has accompanied Sir Ranulph Fiennes on many of his Polar adventures and most lately his incredible Seven Marathons on Seven Continents in Seven Days challenge just after undergoing open heart surgery.

Dr Mike Stroud is an adventurer in his own right. Upon qualifying as a doctor, he decided he wanted to understand how the body works and so, not only was he a practicing hospital physician specialising in nutrition and metabolism, he undertook research into human performance and survival for the Ministry of Defence. Throughout his life he has taken part in some of the most epic journeys and challenges of our time including the iconic Marathon des Sables.

The reason I think this book is a real treasure is because not only does Mike Stroud start from the cradle of life explaining how and why the body was designed the way it is, moving though thousands of years of evolution, but because he breaks up the How and Why with real life stories recounting incidents where the human body has gone past the limits of its engineering. Stories include a runner who is lost in the Sahara and another telling how he and Sir Ranulf Fiennes survived their epic polar journey losing more body fat and muscle than should be possible and still live.

This book gave me a new level of respect and awe for the ingenious design of the human body and a realisation that nature doesn’t listen to the negative ramblings in your head. It never gives up. Its beautifully written and despite the amount of scientific ‘stuff’ its very easy to read and understand and the stories are written with great humour and feeling. Not only is this incredibly enjoyable to read, it is extremely informative if you want to know what goes on under your skin.

My much loved copy of the book 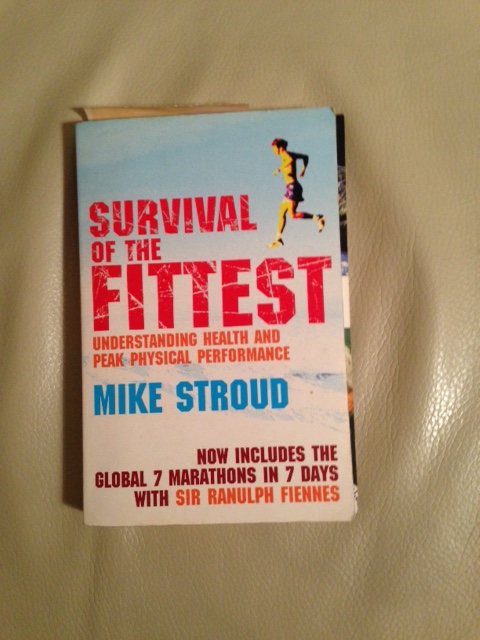 Survival of the Fittest is available on Amazon in both paperback and kindle versions.

Last December I discovered the concept of the Marcothon via some like minded ladies on a sports forum I’m a member of. It gave me the idea to do 31 consecutive days of exercise through January. My plan was that that I would either run 3 miles or exercise for 25 minutes every single day. The challenge culminated in a 10km run through the streets of the City of London, running past some of the most iconic buildings in our amazing capital from Trafalgar Square through to the Bank of England, back past St Paul’s Cathedral and home to Trafalgar Square and the race organisation clearly stated that polar bear hugs were freely available.

I started the challenge early on 27th December in order to get myself into the zone and also because the 10km training plan was a 5 week plan. Even though the plan had rest days included, I had committed to doing something every day and so I balanced out three runs each week with swim, yoga stretching and any gym class that took my fancy.

To tell the complete truth, I have never stuck to a training plan in my life. I always end up cheating or being too tired when I get home from work to do anything or being too busy, giving more time to work commitments than to my own and I’ve gone through training periods in the past missing great chunks of plans – often lying about the training I’ve done  – including to myself – and actually reaping the “rewards” of cheating myself by not achieving my goal and feeling really rubbish about it afterwards. I am hugely impressed with myself that I actually stuck to this plan faithfully and only missed a couple of days during the whole period. Running longer than 200m has always been an exercise in sucking it up and just doing it and since I had my legs operated on a couple of years ago I’ve been really scared of running in case I hurt myself again. Usually I have to be threatened with a blunt instrument to get my backside out of the front door in running kit so this was going to be a big test of my determination.

The Plan entailed three runs each week with a speed/interval session, one steady run and a long run. I planned runs on Tuesday – Interval of about 20-30 minutes, Thursday – a Steady Run of about 30 minutes and Sunday – Long Run which eventually went up to 70 minutes with a Yoga stretch on Monday, Swim on a Wednesday and Saturday and strength training on a Friday. I actually made sure I got out of work before 7pm during the week and home in time to do my training. I have to say that it was a huge effort to exercise every day on top of life. I was absolutely exhausted all the time. I found that I really had to be ruthless and leave the office on time to give myself a chance to do my training. I found the toughest week was week three. By then I was horribly tired and I looked it.  My alarm goes off at 5.20am and my whole body screamed at me to turn over every day and forget about life. It was also a huge effort to change into lycra and get out and do something after I’d spent an hour and a half getting home. It frankly doesn’t help when its winter either. The nights are dark and its chilly and its so much easier to flop on the sofa and whack up the central heating to 25 degrees and watch Midsomer Murders. Its not much fun to get back indoors and have aching teeth from breathing in the cold air.  Something really interesting happened though, and that was that I started to enjoy the runs and to look forwards to each session. My favourite sessions were the interval sessions – short, sharp torture and then home for a cuppa. I also had a real shopping success. I’d been looking at the glow in the dark jackets that Nike and such are selling for £300. I can’t justify that expense, so imagine my utter delight to find that good ol’ Marks and Sparks have made their own versions – jacket and gilet, and at the time I was looking  they were in the sale. I got a fantastic glowing gilet for £20!!

Eating to keep your energy levels high whilst trying to lose weight and also get to bed before midnight is a challenge as well. By the time I get home in the evening its quite late enough and I generally refuse to cook or we would be eating way too late, so my other half would cook his own food and I jiggled my eating about. In fact, I changed my diet quite a lot. During the week I ate avocado with a poached egg ( which I did in a plastic container in the microwave at work) and a slice of toast for breakfast. Lunch was a bowl of soup with salad and protein and dinner was a protein shake made with almond milk. The weekends meant more time to cook and a slightly different rhythm, so breakfast was the same, but lunch would be a shake and dinner would be something like salmon or chicken with veggies and maybe some rice. I even did some batch cooking so that I could take food into work for my lunches. That was boring! I honestly can’t say that I ever felt like I had loads of energy at any point throughout January and I am certain that I was grumpier than normal with creakier knees.

Talking of creaky knees, the other thing that I am particularly proud of, is that I actually spent 20 minutes after every run without fail using a foam roller and stretching. Usually, I think that stretching is for wimps and foam rollers should be saved for clubbing unwelcome household intruders but making the effort to keep my legs in reasonable conditions really made a difference to my usually tight calves and ITBs.

On the 31st January, I ran through the streets of London on a particularly miserable day along with 12, 000 others and I beat my expected time by 7 minutes!

You can escape to financial freedom...

My five year journey to awesomeness...

For Women Of A Certain Age And Attitude

Pay attention. Be astonished. Tell about it.

Be the hero of your own life

The English Channel and Other Adventures